Before we can start writing Java programs, it is important to understand the history and theory of programming. A computer program is simply a list of instructions that tells the computer how to accomplish a certain task. As an analogy, if our task is to drive from Chicago to New York City, we would break that down into a list of directions (start the car, pull out of the driveway, turn left onto 10th Street, turn right onto highway 90, etc). Although many routes exist from Chicago to New York City, we are only interested in ones that are fast and easy to follow. Similarly, there are many different ways to write a computer program, but the best programmers will write programs that are fast, easy to understand, etc.

All computer programs end up as a sequence of bits (0 or 1). Computers use electricity as the way to transport information. If the voltage on an electrical switch is greater than a certain value (usually 5 volts), then the bit evaluates to a 1. Otherwise, if the voltage is less than 5 volts, then the bit evaluates to 0. The image below shows an early computer, where programs are entered by pressing the red and purple switches at the bottom of the console. Each switch represents a bit with the value 0 (unpressed) or 1 (pressed): 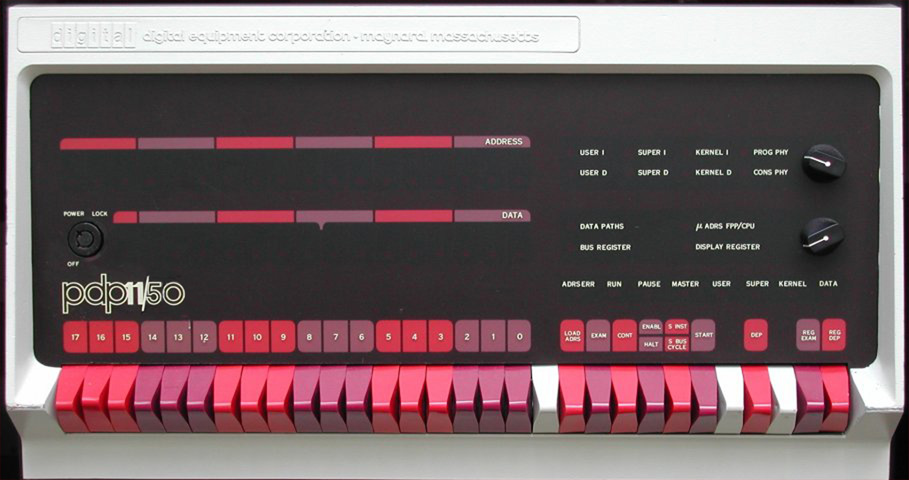 The list of 0s and 1s that a computer is able to run is known as machine language. Although it is still possible to write computer programs using machine language, programs become very difficult to understand if they are more than a few lines long. The solution is to write programs in a human readable language (such as Java) and use a tool called a compiler to transform the program into a sequence of 0s and 1s to be read by the computer. We'll see many examples later on about what a human readable program looks like.

C was the first mainstream programming language that allowed people to write high level programs that got transformed into machine language. It was created by Dennis Ritchie in the 1970s and is still one of the most popular programming languages today, along with Java and a few others. Although C was a major step forward in writing good computer programs, it had several drawbacks. One of the biggest problems was too much complexity for large programs. C is a structured programming language, which is a type of programming language that focuses on the instructions needed to complete a task. For example, if we want to build a house, a list of tasks such as the following could be used:

The are many more tasks than what's listed, and it's very difficult to understand everything on your own. How do I lay a brick foundation? How do I install the roof? How do I wire up the electrical outlets and install plumbing? Writing a program like this using structured programming is going to be difficult to follow. The solution is to just understand the high level details involved and how they fit together. I can hire an electrician to take care of the wiring, and I can hire a plumber to take care of the plumbing. The idea of breaking down a task into high level details is known as object oriented programming. Using this approach, I can focus on the parts of building a house that I need to (let's say creating the blueprint and financing the house) and let other people focus on the details of how the electricity and plumbing will work. We will take a detailed look at object oriented programming in a later post.

C++ (pronounced C plus plus) was the first programming language that popularized the object oriented programming model. It was created in 1979 by Bjarne Stroustrup, and it became popular in the 1980's. Although this was another major step forward in programming languages, there were still some major drawbacks. C++ was written as an extension to the C programming language, which made it easy to fall back on structured programming when writing applications. Many C++ programmers came from a C background, and brought bad habits from C over to C++, even though there were now better ways to do the same thing. Another major problem of C++ was that it wasn't platform independent. This means that once a program is compiled into machine code, it will not run on other computers. A platform is determined by the type of device running the program and the operating system (there are a few other factors, but those are the main ones). So, if I write a program in C++ on my Mac, the machine code will not run on a Windows computer or Android phone. This is a big limitation today, because web development is very popular, and being able to run the same program on different devices without having to make changes is a great productivity boost.

This brings us to Java. Java was created in 1996 by James Gosling to overcome many of the deficiencies in C and C++. The problem of platform independence was solved by compiling the code into an intermediate language, known as bytecode. Bytecode is a list of simple instructions that can be further compiled into machine code and run by the computer. The application that takes bytecode and runs it as machine code is known as the Java Runtime Environment (JRE). Since almost all computers and devices come with the JRE preinstalled, you can share your program's bytecode with someone else using another device, and it will run without any changes. The application that takes a Java program and coverts it into bytecode is known as the Java Development Kit (JDK). The JDK includes the JRE, and allows a programmer to write an application, convert it to bytecode, and run the corresponding machine code all in one go. The diagram below shows how a java program is converted to bytecode and run as machine code:

Don't worry about the difference between bytecode compiler and bytecode interpreter in the diagram. The point is that the bytecode will be transformed into machine code, which is run by the computer. Another benefit of compiling a java program to bytecode is that a large application can be written using many programming languages. As long as a programming language can be compiled to bytecode, it will run on the JRE. Many languages, including Python, Ruby and Scala, can be compiled to bytecode. This allows multiple teams working on the same project to use their favorite programming language and integrate it with code from another team in a different language.

Just as Java is a large step forward from C++, there are a few shortcomings in the Java language as well. I will show some of those in later posts. Many languages, such as C# (pronounced C sharp), were inspired by Java and created to address some of the deficiencies. Despite those attempts, Java has remained a reliable and powerful language, and is the programming language used most in the industry. Now that you understand the history behind Java, it's time to prepare for writing our first program in the next post!